Actress Barbie Ferreira announced Wednesday that she won’t be returning to the HBO drama “Euphoria.”

“After four years of getting to embody the most special and enigmatic character Kat, I’m having to say a very teary eyed goodbye,” Ferreira said in a statement posted as an Instagram story.

She continued: “I hope many of you could see yourself in her like I did, and that she brought you joy to see her journey into the character she is today. I put all my care and love into her and I hope you guys could feel it. Love you Katherine Hernandez.”

It’s not known what the circumstances of her departure are. 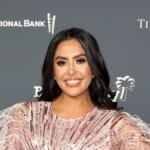