Berkeley Breathed’s “Bloom County” comic strip, which debuted in 1980 and wrapped in 1989, is being developed as an animated series by Fox Entertainment’s animation studio.

The out-there strip blended political satire of the Reagan era with off-the-wall absurdity as corrupt lawyer Steve Dallas hung out with the very frazzled Bill the Cat and Opus, the existential penguin. It ran in 1,200 newspapers worldwide and led to spinoff strip “Outland” and “Opus.” Breathed revived the strip on Facebook in 2015.

Breathed promised he’ll deliver even more chaos in the animated series, on which he serves as as co-writer and executive producer. 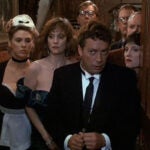 “At the end of ‘Alien,’ we watched cuddly Sigourney Weaver go down for a long peaceful snooze in cryogenic hyper-sleep after getting chased around by a saliva-spewing maniac, only to be wakened decades later into a world STUFFED with far worse,” Breathed said in a statement. “Fox and I have done the identical thing to Opus and the rest of the Bloom County gang, may they forgive us.”

“I was introduced to the brilliance of Berkeley Breathed and ‘Bloom County’ as a teenager. His signature blend of satire, politics and sentiment hooked me.  Plus, I love Opus,” added Michael Thorn, president of entertainment at Fox Entertainment.  “Today, Berkeley’s smart and hilarious take on American culture is more relevant than ever. And, together with Bento Box, we’re thrilled to bring his unique ensemble of characters and social commentary to broadcast television.”

His work on “Bloom County” earned him a Pulitzer Prize for Editorial Cartooning in 1987. He is also the author of ten children’s picture books. His film “HITPIG!,” is due later this year from Aniventure.