WARNING: Spoilers ahead for the season four premiere of “Charmed”

A new Charmed one has arrived. The season four premiere of The CW’s “Charmed” introduced Lucy Barrett’s Kaela, a young witch with manifestation powers. Those powers will be key in helping take down the newest big bad, according to series stars Sarah Jeffery and Melonie Diaz.

What exactly are manifestation powers? Essentially, it’s the power of seeing and creating. In the season premiere, we see that Kaela has a penchant for art, and has been drawing people and places she sees in her dreams (including Mel and Maggie). In some cases, her drawings even manifest themselves in the real world.

Though Kaela’s magic proved to be a problem for Josefina, who ate an apple that fell out of Kaela’s drawing and then became a drawing herself — simultaneously creating a negative space monster — Jeffery and Diaz tease Kaela’s abilities as “super helpful.” 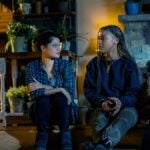 “Yeah, in ways that I think will surprise the audience,” Diaz explained to TheWrap. “Like, you’d be like, ‘Oh, she’s using it there. Oh my god. Brilliant.’”

That said, Kaela — whose full name is actually Michaela, in keeping with the M names of the Charmed ones — is clearly going to need a bit of convincing to stick around. She hasn’t quite embraced her destiny as a Charmed one, but Jeffery and Diaz were excited by the idea of Maggie and Mel being the ones to help her through.

“It’s just interesting because, in the beginning of season one, I remember, you know, Harry teaching us all of the ways to be a witch, and it’s kind of now like the student becomes the teacher,” Diaz said. “And I don’t know, I think it makes them feel like adults, and it makes me feel like an adult, like having a new person come in and be like ‘This is our world!’ And it just makes me feel like, wow, we’ve been doing it and it’s — I feel really lucky to be welcoming a new person in this world, for sure.” 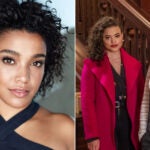 And with a new big bad on the horizon, Maggie and Mel are going to need Kaela. According to Jeffery, The Tallyman is definitely going to be a long-term problem.

“Well, I think he’s my favorite villain we’ve had,” she said. “He is very clever, and a trickster, and a fan of puzzles, which makes it hard to kind of pin him down. And it’s kind of interesting that like, he’s this threat that we don’t even meet until later on in the season. But he has a very ominous presence from the get-go.”

Diaz adds that The Tallyman is strategic and precise. He knows who he’s looking for. 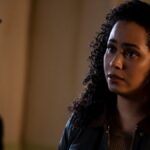 “He preys on the vulnerabilities of people, good people who have a lot of insecurities about the way they’re living their life,” Diaz said. “And I think it’s really similar to like, I don’t know, a really bad person who gets a lot of people to do bad things. A cult leader or something. And I think those are kind of the most evil people in life because they’re just like, literally finding the thing that like makes you upset and makes that worse.”