On “The Late Show” Thursday, Stephen Colbert spent some time mocking the weirdness of modern-day Republican ads. If you’ve watched any, you know: The extreme gun fetishization; the violence both implied and direct; the baked-in hostility; weird music.

And then he showed what it would be like if one of the Republican Party’s most celebrated political ads ever — made for the most-celebrated Republican ever — had been made in 2022 instead of 1984.

For his monologue, Colbert focused on an ad produced by right wing congresswoman Marjorie Taylor Greene, whose new reelection commercial features some pretty weird stuff. It starts with her cocking a shotgun against a gloomy background — with lightning erupting from the shotgun. All set to some very generic hard rock music.

Then he played more of the ad. Greene mentions a bunch of problems she falsely blames on Democrats, and then says “Democrats aren’t the only ones destroying farmers’ ability to food on the table,” as we see her loading a rifle while sitting in a helicopter.

“We’ve got wild hogs destroying farmers’ fields. So we decided to go hog hunting.” And she did. We next see her sitting in the passenger seat of the copter holding that rifle, followed by her shooting a hog — in slow motion. No really. 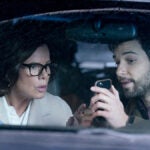 “F— you, hog!” Colbert joked in an exaggerated country accent as he mimed playing a guitar while “The Late Show” band played the rock song from the commercial.

“So, to clarify her argument, Democrats are hurting farmers, so she’s gonna own the libs by shooting feral pigs from a helicopter,” Colbert continued. “This ad is like reading a Mad Lib filled out by somebody that’s on bath salts.”

“Democrats are gutting your rights, and you know what we’re gonna gut? Fish,” Colbert slipped in. “Register today to help me machine fun socialist trout.”

“It may seem that Greene is just looking for an excuse to kill stuff, but it’s all part of a rich tradition of American politics. Who can forget Ronald Reagan’s classic campaign ad?” Colbert uttered. Then he ran his remixed version of Ronald Reagan’s hugely influential “Morning Again in America” campaign commercial from 1984.

It began sort of similar to the original. “It’s morning again in America,” a Reagan impersonator says over footage from that ad. “Let’s throw a grenade in a petting zoo!”

We see this happen, and when then explosion comes, a rock singer croons “sheep are commies!”

“I’m Ronald Reagan, and I approve this message,” the voice over says as an Image of Reagan suddenly takes a bite out of a chicken leg.

During the monologue, Colbert also spent a lot of time mocking struggling Pennsylvania Republican candidate for governor Doug Mastriano, some of the weird hurricane coverage, and the Brett Favre scandal — during which, he joked about the ex-NFL player, who is being investigated for participating in a fraud to steal money allocated to fund welfare in Mississipi, “turns out every picture of Brett Favre is a dick pic.”