Dick Cheney Calls Trump a ‘Coward,’ Says He’s Not a...

Former Vice President Dick Cheney emerged from an undisclosed location Thursday to film a campaign ad for his daughter, Republican lawmaker Liz Cheney, condemning Donald Trump as a “coward” and stumping for her re-election to Congress.

“In our nation’s 246-year history, there has never been an individual who is a greater threat to our Republic than Donald Trump,” Dick Cheney said in a video posted Thursday.

The former Wyoming congressman expressed his support for his daughter’s effort to keep Trump out of office ahead of the Republican primary in Wyoming, where she is trailing in the polls. Liz Cheney, who voted to impeach Trump, currently serves as the vice chair of the House panel investigating the Jan. 6 Capitol Riot. 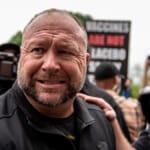 “He tried to steal the last election using lies and violence to keep himself in power after the voters had rejected him,” Dick Cheney said, before calling Trump a coward and noting that “a real man wouldn’t lie to his supporters.”

“He lost his election and he lost big,” he continued. “I know it, he knows it and deep down I think most Republicans know it.”

The former vice president went on to say that he and his wife, Lynne, are proud of their daughter for “standing up for the truth, doing what’s right [and] honoring her oath to the constitution,” and called out members of the Republican party who are “too scared” to do the same.

“There is nothing more important she will ever do than lead the effort to make sure Donald Trump is never again near the Oval Office,” Dick Cheney said. “And she will succeed.”

“I proudly voted for my daughter. I hope you will too,” he concludes.

Liz Cheney will run in the Republican primary in Wyoming Aug. 16.