Donetsk and Luhansk in Ukraine: A creeping process of occupation

The significance of the Kremlin’s move should not be underestimated. It completely overturns the status quo. By recognizing the independence of eastern Ukraine‘s Donetsk and Luhansk separatist-held regions and, above all, by the deployment of Russian troops to these areas, Russia has drawn a line under what has been its policy for nearly eight years. Up to now these breakaway regions had existed in a gray zone: formally part of Ukraine, but, de facto, under Moscow’s rule.

The self-proclaimed ‘People’s Republics’ of Donetsk and Luhansk were formed in spring 2014, following Ukraine’s pro-Western opposition protests and a change of leadership in Kyiv. Today, these areas take in about a third of the Donbas region and the cities of Donetsk and Luhansk. Like Germany’s Ruhr Valley, these areas were very densely populated. Some six to seven million people used to live there.

Both areas have been shaped by the coal and steel industries, but there are also stark differences between them. While Luhansk was generally held to be Ukraine’s poorest region, the city of Donetsk was relatively wealthy. In 2012, it was one of the hosts of the Euro 2012 football championships.

Since the conflict broke out, millions of people have left the separatist areas. A majority of the civilians fled to Ukraine, hundreds of thousands to Russia.

What led to the split?

There were barely any signs of separatist strivings after the collapse of the Soviet Union in 1991 until 2004. Back then, the Orange Revolution overturned the presidential victory of Viktor Janukovych, a pro-Russian politician and former governor of the Donetsk region, amid claims of vote rigging. His Party of the Regions, whose power base was located in eastern Ukraine, threatened to break away, but ultimately did not carry through on that threat.

Janukovych did, however, go on to become president in 2010, flipflopping politically between Russia and the EU. His final abrupt shift towards Moscow sparked opposition protests in the winter of 2013/2014, and he fled to Russia. The Kremlin took advantage of the power vacuum in Kyiv to annex Crimea. In eastern Ukraine, pro-Russian sentiment was not as strong as in Crimea. However, skepticism about the new leaders in Kyiv was strongest in Donetsk and Luhansk.

Some in the Donbas region also perceived Yanukovych’s flight to Moscow as a defeat. Yet the pro-Russian and pro-Ukrainian camps seemed roughly equal. According to a survey, some 20% of the inhabitants of Donetsk said they were prepared to welcome Russian troops as their liberators. Around the same number wanted to fight for Kyiv.

In spring 2014, the administrations of several urban centers were occupied and police stations were stormed to seize weapons. Russian citizens with apparent links to the Russian secret services were the driving force. Subsequently, Moscow-backed separatists organized disputed referendums that sought to legitimize “self-rule.”

Kyiv attempted to contain the insurgency. The Ukrainian army managed to regain control over most areas by summer 2014.  But in August, the Ukrainian army suffered a defeat after being encircled in the battle of Ilovaisk, southeast of the city of Donetsk. Moscow still denies that regular Russian forces were involved. This put an end to major combat. The Minsk agreements of February 2015 laid down the front line. Since then, there has been a shaky ceasefire between the Ukrainian army and the Russian separatists.

From the outset, both regions experienced a rapid process of Russification. It began with the introduction of Russian textbooks in schools and the Russian currency. Russian advisors allegedly helped build up the separatists’ forces, something that Moscow denies. Industry in the region has suffered significantly as a result of the split with Kyiv. Some companies were relocated to Russia. Ukraine broke off all economic relations with the separatist areas. 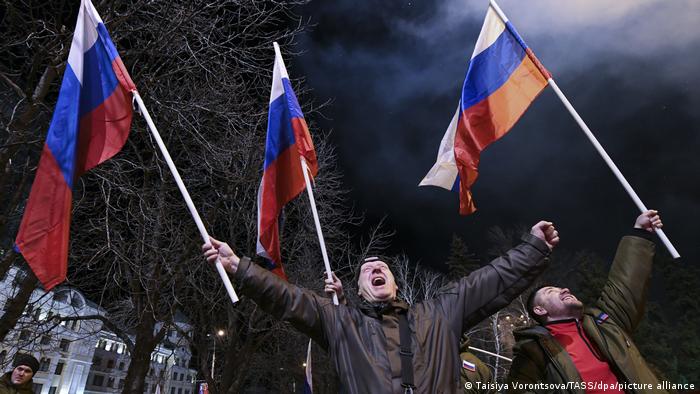 In 2019, Russia began to distribute Russian passports to the area’s inhabitants. According to the latest reports, some 800,000 eastern Ukrainians are said to have Russian citizenship — an estimated 15 to 25% of the population, although exact figures are hard to obtain. This is the central argument behind the Kremlin’s recognition of the independence of the separatist regions.

Ukraine struggled to define the legal status of these regions. Initially, Kyiv described them as “terror organizations.” Later, the Ukrainian parliament declared that Donetsk and Luhansk were occupied regions. However, Russia was not named as the occupying power until 2018. Under international law, they both remain part of Ukraine.

For decades now Moscow and Kyiv have been engaged in a dispute about language. Russia has long criticized the Ukrainian government, saying it discriminated against Russian speakers. Kyiv denies that. The fact is: The use of Ukrainian, as the country’s only official language, has increased in the media and in written communication. However, Russian is spoken primarily in the cities of eastern and southern Ukraine while Ukrainian or a mixture of the two languages is spoken outside those urban centers. Two thirds of the inhabitants of the separatist regions say Russian is their mother tongue, according to a survey conducted by Berlin’s Center for East European and International Studies (ZOiS) in 2019. About one in three people said they spoke both languages; only 3.5% said Ukrainian was their mother tongue.

The current mood among the population of the two regions can only be approximately gauged. According to the ZOiS study, which is three years old, about a third of the inhabitants of Luhansk and Donetsk were keen to gain autonomy within Ukraine or Russia. Almost 20% wanted to return to how things were before the split and just as many were in favor of becoming part of Russia without autonomous status. However, it is impossible to check the accuracy of these figures.

This story was originally written in German.