The move is the latest in a series of firings linked to the country’s currency crisis that has caused inflation to skyrocket.

Earlier this month, the agency released data showing that the official inflation rate had reached 36.1%, a 19-year high.

But opposition leaders believe even this figure is too optimistic and claim the real cost of living rose by at least twice as much.

Data for January, due for release next week, is expected to show official inflation has reached 47%.

Dincer’s replacement is Erhan Cetinkaya, who served as vice-chair of Turkey’s banking regulator.

Erdogan has drawn criticism for his repeated overhaul of the country’s economic team, including replacing three central bank governors in the last two and a half years while also changing his finance ministers and other top officials.

He has also ordered the central bank to cut interest rates, believing that high rates cause inflation — the exact opposite of conventional economic thinking.

The moves have caused the national currency, the lira, to plummet more than 40% against the dollar, spurring huge price increases.

On Saturday, Erdogan repeated his unorthodox economic policy, saying interest rates would be lowered further and inflation would fall as a result.

“You know of my battle with interest rates. We are lowering interest rates and we will lower them. Know that inflation will fall too then, it will fall more,” he told supporters in the Black Sea province of Giresun.

“[The] exchange rate will stabilize and inflation will fall, prices will fall too, all of these are temporary.” 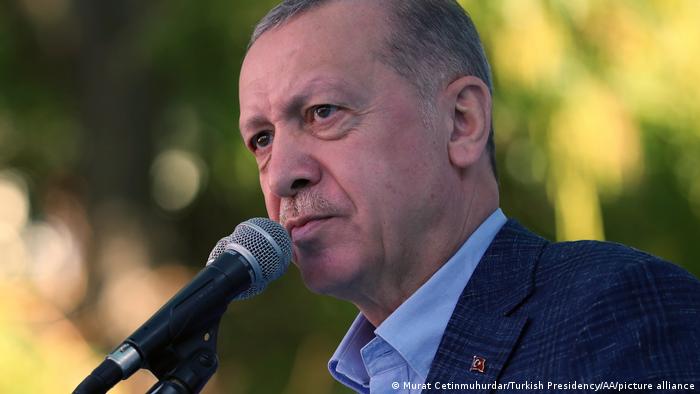 No reason was given for Gul’s departure.

The president also threatened Turkish media with legal action if they air content that is “incompatible with national and moral values.”

In a decree, Erdogan said that “it has become requisite to take necessary measures to protect (families, children and the youth) against harmful media content.”

The decision is seen by critics as an attempt to stifle dissent in the run-up to elections next year. Earlier this month, prominent reporter Sedef Kabas was jailed on suspicion of insulting Erdogan and could face a years-long prison term.

Faruk Bildirici, veteran journalist and media ombudsman, on Twitter, accused Erdogan of declaring a “state of emergency against the media.”