A trial relating to a 2016 assassination attempt on a priest began in Paris on Monday.

The attack that murdered 85-year-old priest Jacques Hamel in a Catholic church in Saint-Étienne-du-Rouvray near Rouen shook France.

Police had shot and killed the two assailants on the scene. The trial on Monday involves alleged accomplices. 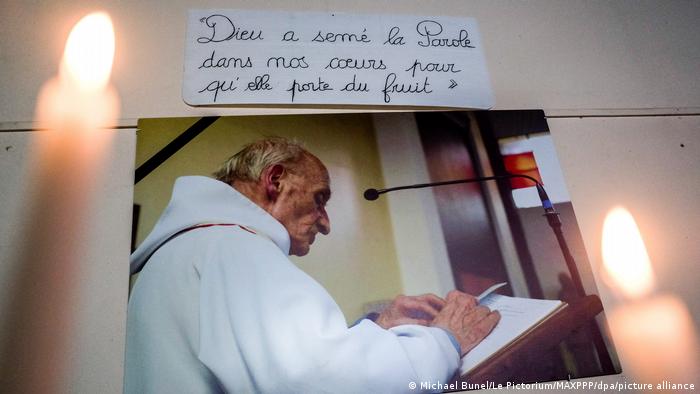 Catholic Church officials have launched the process to seek beatification for Hamel, a first step to canonization or sainthood

Who is on trial?

The other three face charges of membership in a terrorist organization, which they have denied. Their lawyers have described them as “scapegoats.”

The two 19-year-old attackers, who were shot and killed on the scene, had claimed in a video to be members of the so-called “Islamic State” (IS) group.

IS later called them its “soldiers” and said the attack was in retaliation for France’s fight against jihadists in Syria and Iraq.

Prosecutors say the three knew about the attackers’ plan, and one of them had accompanied one of the attackers to Turkey — in an attempt to reach Syria — just weeks before the murder.

During morning Mass on July 26, 2016, two attackers first took six people hostage in the church in a working-class suburb.

Father Hamel had his throat slit at the foot of the altar while a nun was able to escape and raise the alarm.

One of the worshipers taken hostage, Guy Coponet, was also seriously injured. Coponet, now 92, is expected to attend at least part of the court sessions “to understand how these youths, barely out of adolescence, could commit such horrors,” his lawyer told the AFP news agency.

France has been facing a series of jihadist attacks that began with the 2015 Charlie Hebdo massacre.