‘Friends’ Creator Donates $4 Million Due to ‘Guilt’ Over Show’s...

After feeling “guilt” and being “embarrassed” over the lack of diversity in “Friends,” creator Marta Kauffman is pledging $4 million to the African and African American Studies program at her alma mater Brandeis University.

In a recent interview with the Los Angeles Times, the television writer said she began understanding the criticism directed at her series — the uber-popular ’90s sitcom that continues to dominate the zeitgeist thanks to syndication and era-specific nostalgia — following the waves of Black Lives Matter protests in 2020.

“It was after what happened to George Floyd that I began to wrestle with my having bought into systemic racism in ways I was never aware of,” Kauffman said. “That was really the moment that I began to examine the ways I had participated. I knew then I needed to course-correct.”

The Marta F. Kauffman ’78 Professorship in African and African American Studies at the private research university will support a distinguished scholar with a focus in the study of the people and cultures of Africa and the African diaspora. The grant will also assist the department to recruit more experts and professors, plan long-term academic priorities and provide new opportunities for students to engage in interdisciplinary scholarship.

Regarding the response she’s gotten since the donation’s announcement, Kauffman said, “I’ve gotten nothing but love. It’s been amazing. It surprised me to some extent, because I didn’t expect the news to go this wide. I’ve gotten a flood of emails and texts and posts that have been nothing but supportive. I’ve gotten a lot of ‘It’s about time.’ Not in a mean way. It’s just people acknowledging it was long overdue.”

She added that it was initially “difficult” and “frustrating” engaging with the critiques: “I’ve learned a lot in the last 20 years. Admitting and accepting guilt is not easy. It’s painful looking at yourself in the mirror. I’m embarrassed that I didn’t know better 25 years ago.” 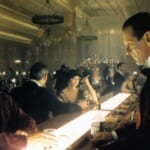 “Friends” — which starred Jennifer Aniston, Courteney Cox, Lisa Kudrow, Matt LeBlanc, Matthew Perry and David Schwimmer — had no characters of color in its main ensemble. Some smaller supporting roles featured characters from a variety of backgrounds, portrayed by the likes of Gabrielle Union, Mark Consuelos and Craig Robinson, but their arcs were often one-and-done. Conversations regarding diversity resurfaced following last year’s reunion special on HBO Max.