Berlin and other cities across Germany increased police patrols on Monday ahead of expected pro-Russia protests.

The demonstrations are happening to mark Victory Day on May 9, a holiday commemorating the Soviet military’s victory over Nazi Germany in 1945.

Tensions are running high this year over Russia’s invasion of Ukraine, with authorities in Berlin banning both Russian and Ukrainian flags at memorial sites.

What’s expected at the protests?

In Berlin alone, several rallies and other events are planned on Monday. Most of the events are taking place at the city’s Treptower Park, where a memorial to fallen Soviet soldiers is located.

Around 1,300 participants are expected at the largest demonstration, set to take place in the early afternoon.

Police are expecting members of the “Night Wolves” biker club to take part. The club is comprised of Russian nationalists who are believed to be close to Russian President Vladimir Putin.

In an effort to “protect” events honoring fallen Soviet soldiers at the city’s memorial sites, Berlin police have banned Russian and Ukrainian flags and military uniforms.

“At the same time, we will take action against any form of support, approval, exaltation, or even glorification of Russia’s war of aggression against Ukraine — especially at rallies,” Berlin police chief Barbara Slowik said in a statement.

“We will not accept any instrumentalization of the commemorations for these purposes,” she added.

Demonstrations are also expected in other areas across Germany on Monday. Car protests that included supporters of Russian President Vladimir Putin took place on Sunday in the western city of Cologne, with 1,000 people taking part.

At the same time on Sunday, a demonstration in support of Ukraine also took place in Cologne, with 10,000 participants.

Ukrainian officials criticized Berlin’s decision to ban Ukrainian as well as Russian flags from events at memorials in the city.

“Berlin has made a mistake with the banning of Ukrainian symbols,” Foreign Minister Dmytro Kuleba said. 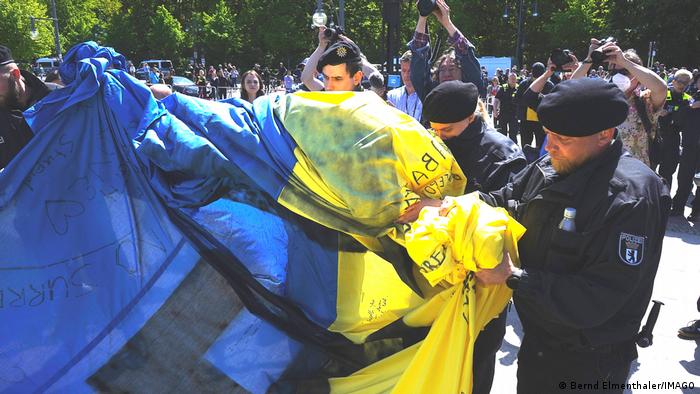 He added that it was wrong to treat Ukrainian symbols the same as those supporting Russia and Putin.

Kuleba described the move to bar Ukrainian flags from peaceful protesters as an attack on those who are protecting Europe and Germany from Russian aggression.

Berlin’s city government defended the move, saying it was an effort “to avoid possible confrontations” at the memorial sites.

German Chancellor Olaf Scholz addressed the nation on Sunday in a speech marking the end of World War II in Europe.

He criticized Putin’s attempt to portray the invasion of Ukraine “as being on par” with the fight against the Nazis, which Scholz slammed as a “falsification of history and a disgraceful distortion.”

“We have learned a central lesson from our country’s catastrophic history between 1933 and 1945,” Scholz said. ” “We defend law and freedom — on the side of the victims. We support Ukraine in the fight against the aggressor.”