How to Watch ‘Unprecedented’: Where Is the Trump Docuseries Streaming?

The much buzzed-about Donald Trump documentary “Unprecedented” is finally being made available to the public, after Alex Holder’s docuseries was thrust into the spotlight as part of the January 6 committee hearings.

Footage from “Unprecedented,” the three-part documentary from the AJH Films founder, was subpoenaed by Congress for use in the January 6 committee hearings. Holder’s docuseries focuses on the Trump family before the events of the Capitol insurrection on Jan. 6. Holder previously released a statement about the events surrounding his work on Twitter, saying in part, “As a British filmmaker, I had no agenda coming into this. We simply wanted to better understand who the Trumps were and what motivated them to hold onto power so desperately.”

Trump supporters, denouncers and anyone in between may be wondering how to watch “Unprecendented,” and here’s how (and when) you can view the documentary footage. 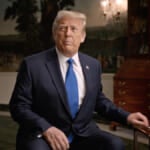 When Does “Unprecedented” Come Out?

Is the Trump Documentary on TV or Streaming?

The docuseries will be available to stream on Discovery+, which will be the only way to watch it for now.

What Is “Unprecedented” About?

Alex Holder has compiled footage from sit-down interviews with Donald Trump, Mike Pence and Trump’s family. Other interview subjects include the former president’s staffers, daughter Ivanka Trump, son-in-law Jared Kushner and sons Eric Trump and Donald Trump Jr. Journalists who reported on the final weeks of Trump’s presidency may be featured as well. Holder interviewed Trump once before Jan. 6 and once after, and the footage available will contain Trump’s thoughts on the day of the Capitol riots. There’s also footage from within the White House, Mar-A-Lago and behind the scenes on Trump’s 2020 campaign trail.

What Footage Did Holder Turn Over to Congress?

Clips of the documentary that made it to the House Select Committee include Trump talking about Jan. 6.

​​“Well it was a sad day, but it was a day where there was great anger in our country,” Trump said in the footage. “People went to Washington primarily because they were angry with an election they think was rigged. They were angry because they’re smart.”

Another snippet shows former Vice President Mike Pence receiving an email detailing a draft resolution from Contgress asking that he remove Trump from office through the 25th Amendment.

In the video interview, Pence reads the e-mail on his phone, says “excellent,” then asks a staff member to “print me off a hard copy for the trip home.”

Pence then tells Holder “I”m always hopeful about America. I always believe that America’s best days are yet to come.” 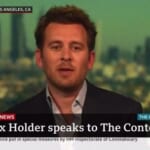