Kimmel Offers Some Healthy Skepticism of Russia’s Excuse for Yet...

On Tuesday’s episode of “Jimmy Kimmel Live,” Kimmel took some time in his monologue to express some rather healthy skepticism of the excuse the Russian Olympic team has for yet another doping scandal. And really, he had a point.

He was speaking of course about Russain figure skater Kamila Valieva, who tested positive for three banned substances, heart medicationd that can also boost endurance in people who don’t have heart problems. her excuse for testing positive for the drugs? She claims her grandfather takes them and somehow being around him exposed her to it.

That positive test should have instantly disqualified her, but in what critics contend is blatant corruption, the International Olympic Committee has decided to let her compete anyway. They’ll continue to investigate, medals in her event will be delayed until that investigation ends, and depending on how it works out and she could, possibly, be stripped of her medals later. Which brings us back to Kimmel. 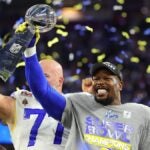 “She was tested on Christmas, but the result didn’t come back until last week,” Kimmel said. “So now, she is in first place, but they’re planning to delay the medal ceremony until the investigation is done. So nobody gets a medal until they know.”

“And her excuse is a great one. She claims the reason she tested positive for heart medication is because her grandfather takes it – and it somehow accidentally got in her,” Kimmel continued.

“Her lawyer said maybe her ‘…Grandfather drank something from a glass, saliva got in, and this glass was somehow later used by the athlete.’ Ah, the old ‘Must be from my grandpa’s saliva’ defense huh,” Kimmel added. “We’ve all shared a big wet cup of water with granddad, haven’t we? I think the real question is, how much of your grandfather’s saliva are you coming in contact with and why?”

“She tested positive for three substances that can be used to treat heart problems. God. Imagine how devastating that must be,” Kimmel joked. “You train your whole life to be in the Olympics, you follow all the rules, put in all the hours, eat the right things, and then at the last minute, you accidentally take your grandfather’s heart medicine.”

Kimmel ended this segment by nodding to the larger corrupt context for it all. “And why does this keep happening to Russia?” he said. “These poor people. Will you leave them alone?”

In case you’re not aware, Russia is in then middle of a multiyear ban from the Olympics due to repeatedly, blatantly cheating through performance enhancing drugs. So why are Russian athletes even competing? Because the IOC allows them to compete under the “Russian Olympic Committee” banner, as if that somehow is different from just letting the country be there officially.

Anyway, suffice to say, this whole situation isn’t sitting very well with people, including many former Olympians. Which is why we noted above that Kimmel has a point. Watch the whole monologue above. Kimmel’s skeptical take on this situation kicks in at about the 9-minute mark.