Haberman received a lot of criticism for thenew book, “Confidence Man” — because it turned out she learned information of immediate national importance while writing it, but instead of informing the public held it back to make her book juicier.

But not everything in that book was stuff she arguably should have reported as soon as possible. Some of it is gossipy and weird and somewhat funny stuff that really fleshes out the character of a man who tried to overthrow the government when he lost an election. Like the stuff Kimmel talked about.

“This book says that after the election in 2016, Melania renegotiated her prenuptial agreement,” Kimmel said while chuckling. “You know, those two love birds, they’re so romantic. And it’s really sweet.” 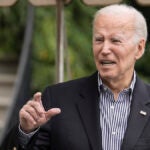 “Years ago, before he proposed to his second wife, Marla Maples, they broke up and she started dating Michael Bolton, the singer,” Kimmel said next. “So of course Trump had to get her back. And once he did, he took her to a Michael Bolton concert, just to rub it in.”

“He really showed Michael Bolton,” Kimmel joked, “by buying two tickets to see him in concert. Going to see Michael Bolton to assert dominance in a relationship? That’s gotta be the whitest thing I’ve ever heard anyone do.”

Kimmel went on from there, including another pretty gross story about Trump’s love live, and his workplace habits during his presidency. You can watch the entire monologue at the top of the page. The Trump stuff begins at approximately 2 minutes in.