Kingsley Ben-Adir to Star as Bob Marley in Untitled Biopic...

Kingsley Ben-Adir has been cast as ‘Bob Marley’ in Paramount Pictures’ untitled Bob Marley music biopic, according to an individual with knowledge of the project.

Zach Baylin, who is nominated for an Academy Award in the “Best Original Screenplay” category for “King Richard” is writing the script. 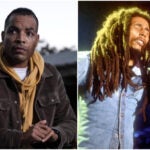 Marley died at age 36 of cancer in 1981, but the Jamaican artist helped spread reggae music throughout the world and contributed to changing the face of rock music with his messages of peace and love in songs like “Jammin’,” “No Woman No Cry,” “I Shot the Sheriff,” “Redemption Song” and many more. His greatest hits album “Legend” has sold 12 million copies in the U.S. and is the best-selling reggae album of all time.

Kingsley’s most recent credits include “The OA,” One Night in Miami” and “Secret Invasion.”
Kinglsey is repped by CAA, Range Media Partners and B-Side Management.