Leaked documents reveal Russia faces a deep and long recession as the impact of harsh sanctions by Europe and the US takes a financial toll on the Kremlin in the wake of its illegal invasion of Ukraine. Russia’s economy minister confirmed the internal report prepared for the government, which predicts scenarios like the nation’s GDP not recovering until the end of 2030, according to Bloomberg.

The news comes despite Putin today telling an economic forum in Russia’s far east that the West’s futile and aggressive attempts to isolate Russia with sanctions were failing.

But the report paints a dire picture in comparison to the upbeat public announcements by the Kremlin which say they can overcome crippling sanctions by the West.

This year, the rouble has been the world’s best-performing currency, buoyed by emergency capital controls rolled out by the central bank in a bid to halt a mass sell-off after February 24 when Russia began what it calls “a special military operation” in Ukraine. 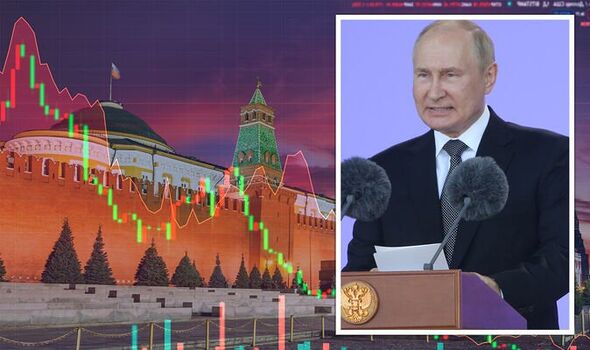 Russia’s economy has been hit by its war in Ukraine (Image: GETTY )

This helped to avoid an economic meltdown that many had predicted and has allowed Russian officials to make more positive forecasts about the health of the economy.

But in the report’s “inertial” scenario, Russia’s doomed economy suffers a 8.3 percent peak-to-trough slump by 2023, while the “stress” scenario sees a low in 2024 at 11.9 percent under the previous year’s level.

The report also predicted a “reduced production volumes in a range of export-oriented sectors” such as metals and oil and gas.

Speaking about imports, the report said: “The main short-term risk is the suspension of production due to lack of imported raw materials and components.”

And it warned of permanently limited growth due to the inability to repair imported equipment over the long term.

The report also said there was a big risk of production being suspended due to Russian firms struggling to bring in materials, saying: “There are simply no alternative suppliers for some critical imports”.

This is because Russia’s aviation, agriculture and pharmaceutical sectors are all heavily reliant on the import of products and Western technology.

While Russian stocks were falling, after the benchmark MOEX index struck a more than four-month high of 2,492.15 points in the previous session.

But Putin today insisted Russia’s economy was coping with what he termed the financial and technological aggression of the West.

However, he did, acknowledge some difficulties in some industries and regions.

Speaking at Russia’s Eastern Economic Forum in Vladivostok, Putin revealed firms that were depending on supplies from Europe were among those struggling.

He said the West’s sanctions were short-sighted and a danger for the entire world which he said was increasingly turning towards Asia.

The Russian despot accused the West of undermining the global economy with an “aggressive” attempt to impose its dominance across the world.

Putin, Russia’s paramount leader since 1999, added: “We have not lost anything and will not lose anything.

“In terms of what we have gained, I can say that the main gain has been the strengthening of our sovereignty, and this is the inevitable result of what is happening now.

“This will ultimately strengthen our country from within.”