‘Logan’ Director James Mangold Had the Best Response to Hugh...

The news Tuesday that Ryan Reynolds convinced Hugh Jackman to play Wolverine one last time in “Deadpool 3” confused a lot of people. Mainly because Wolverine died pretty definitively in “Logan.”

Plenty of frustration and even anger ensued. The assumption being that even though “Deadpool” movies work on cartoon logic and whatever Jackman gets up to will be funny first, sensical second, bringing Wolverine back will somehow ruin the excellent 2017 film in which he was killed. And of course plenty of people complained about Marvel using the multiverse to potentially bring Jackman back for good.

But then “Logan” director James Mangold showed up with the best response of all, a gif of the moment late in “Logan” when Wolverine is brutalized.

A huge amount of people took this as proof that he agrees with the criticism and also is quite mad about the situation. Not so. After seeing those replies, Mangold shot back with plenty of niceties about the film, and its stars. 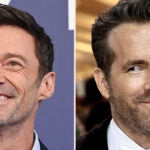 “Oh my gosh! Everybody chill. Just kidding! I’m all good! LOGAN will always be there. Multiverse or prequel, time warp or worm hole, canon or non-canon or even without a rationale, I cannot wait to see what maddness my dear friends @VancityReynolds and @RealHughJackman cook up!” Mangold said.

Reynolds responded with some amusing and high praise for Mangold:

So, to sum up, all is well between the director of “Logan” and the people bringing Wolverine back from the dead. The world can rest easy.