Of course the biggest issue in America is the final repeal of Roe v. Wade by an unrestrained right wing Supreme Court majority, all but one of whom were appointed by presidents who didn’t actually win the popular vote. And naturally that horrific turn of events was front and center in Bill Maher’s monologue on Friday’s episode of “Real Time.”

Maher kicked off his opening bit with a detailed series of half-jokes about it, noting that this week has been filled with unhinged SCOTUS decisions; not just the repeal of Roe for example, but also the elimination of even tepid gun control laws in America. 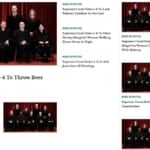 “Welcome to right wing America, where if you want to end a young life, you have to shoot them,” Maher added a few seconds later.

Maher credited these setbacks to the country to conservatives, who “kept their eyes on the prize” of taking over the Supreme Court. Maher noted among other things that three of the Justices who voted with the majority were appointed by Donald Trump, who “is out of office, but his awfulness lingers on. He’s like a fart with bad hair.”

Maher also addressed certain leftist voters, who he called ‘purists,’ who in 2016 who voted for Jill Stein or didn’t vote at all because Hillary Clinton, “said ‘super predator’ in 1996. Enjoy getting super pregnant in 2022.”

Later, Maher joked that “It’s gonna be a fun America that we’re going to live in, isn’t it?” and eventually lamented that “we are going to be living in two very different Americas.”

Watch part of his monologue above now.