‘Murder, Anyone?’: See Exclusive Images From Thriller-Comedy Based on Play...

In director James Cullen Bressack’s upcoming film, “Murder, Anyone?”, two playwrights named George and Charlie, are tasked with the challenge of creating the next “avant-garde, surrealistic, mind-bending neo-noire thriller.”

Unfortunately, as they write, the story comes to life in real time. However, their own emotions and arguments also begin to manifest on film, creating sharp twists and turns and filling their life with hilarity — and chaos. And below, you can get a hint of what that’s like courtesy of some exclusive-to-thewrap images.

The comedic play-within-a-play-within-a-movie, which per Bressack contemplates “the complexities of language, art, theater, film and more” is also especially personal for him. It’s based on the play written by his father, Emmy award-winning “Pinky and the Brain” writer Gordon Bressack, who died in 2019. 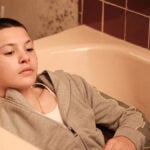 “I self financed and made the film in honor of my fathers memory so his words could live on,” Bressack said. Bressack explained also that near the end of his life, his father wrote and self-financed plays, and their conversations about doing that as opposed to producing them as films inspired his decision to adapt his father’s work.