Peloton CEO John Foley is stepping down, the fitness company announced during a Tuesday earnings call. Foley will be replaced by former Netflix and Spotify CFO Barry McCarthy.

“Peloton is at an important juncture, and we are taking decisive steps. Our focus is on building on the already amazing Peloton Member experience, while optimizing our organization to deliver profitable growth,” Foley, who co-founded the company a decade ago and will now serve as executive chair, said in a statement, per Bloomberg.

On Tuesday, it was also announced that the company would be cutting 2,800 jobs and restructuring.

“This restructuring program is the result of diligent planning to address key areas of the business and realign our operations so that we can execute against our growth opportunity with efficiency and discipline,” Foley’s statement continued. 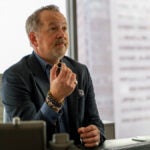 The company is also expanding commercial agreements with third-party providers as a means of reducing its owned and operated warehouses and delivery footprint. Per an official statement, Peloton expects to deliver at least $800 million in annual cost savings with its new program and reduce capital expenditures by approximately $150 million in 2022.

Peloton’s statement confirmed that the roster of instructors and “breadth and depth” of content will not be impacted by the layoffs and restructuring.

The reshuffling comes as Peloton faces flailing stock prices. The one-time pandemic favorite flourished as customers flocked to streaming classes and at-home exercise equipment, but since lockdowns have lifted and gyms have opened back up, Peloton’s valuation has dropped drastically, with shares falling off more than 80% from their January 2021 peak. 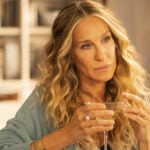 Additionally, Peloton took some PR hits this year when two fictional characters suffered heart attacks after riding Peloton bikes. First, HBO’s “Sex and the City” sequel series “And Just Like That…” shocked fans by killing off Mr. Big (Chris Noth) in the first episode, and Showtime’s “Billions” followed soon after (though that character survived).

Peloton’s stock plunged after the “And Just Like That…” episode and the company attempted to save face with a cheeky commercial featuring Noth, but had to pull the ad just days later when Noth was accused of sexual assault by two women (he has denied the allegations).