Protests in Karakalpakstan over the weekend led Uzbek President Shavkat Mirziyoyev to announce that the republic’s autonomous status would remain unchanged. Mirziyoyev’s announcement came after protests escalated over the weekend in and around Karakalpakstan’s capital, Nukus, following the release of a draft constitutional referendum that would have extended presidential terms and revoked the republic’s autonomy.

According to official reports, demonstrators tried to seize government buildings. “There were victims among the civilians and law enforcement officers,” Mirziyoyev said in a written statement in which he also declared a monthlong state of emergency in Karakalpakstan, which lies in northwestern Uzbekistan.

Neighboring Turkmenistan and Kazakhstan, Karakalpakstan has a population of just under 2 million — or a little over 5% of Uzbekistan’s more than 36 million people — but spans nearly 40% of the country’s territory. With a strip of coast along the evaporating Aral Sea, Karakalpakstan consists mostly of desert and, therefore, lacks rich soil. The republic’s unemployment rate is high, and Karakalpakstan is economically dependent on the rest of Uzbekistan.

The Karakalpak people — whose name translates to “Black Hat,” which many of them wear — are an ethnic minority who speak a language related to but distinct from Uzbek. The Karakalpak language, like the Kazakh language spoken across the border, belongs to the Kipchak branch of the Turkic family, while Uzbek belongs to the Karluk branch, which is shared with the Uyghurs in western China.

Having settled in the region around the Amu Darya river in Central Asia during the 18th century, Karakalpaks came under Soviet Russian rule in 1920. In 1925, Karakalpakstan was established as an autonomous province of the Kazakh Autonomous Soviet Socialist Republic.

In 1993, Karakalpakstan signed a 20-year reunification agreement with the central government in Tashkent, which guaranteed the republic’s constitutional right to withdraw via referendum from Uzbekistan. According to the agreement, after 20 years, the parties would either extend the agreement or Karakalpaks would hold a referendum on leaving Uzbekistan. But there was no vote in 2013. 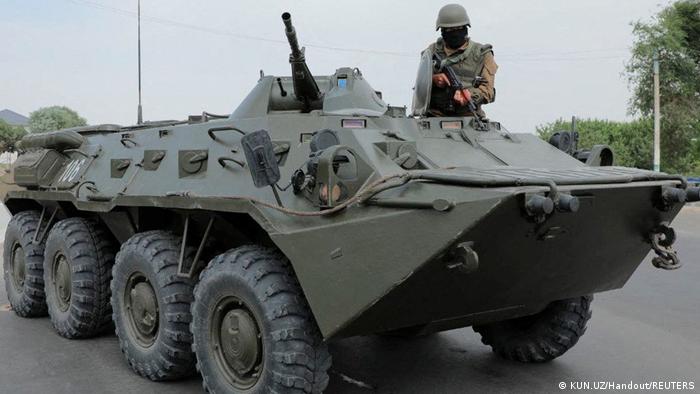 Uzbekistan’s government declared a monthlong state of emergency in Karakalpakstan

There have been independence movements, including the Free Karakalpakstan National Revival Party and Alga Karakalpakstan, but these have had minimal influence.

The draft text of the referendum announced in June made no mention of Karakalpakstan’s “sovereign” status or right to secede and if passed would also have eliminated the republic’s constitutionally ingrained right to self-determination. The proposed amendments were part of a package of constitutional changes that Mirziyoyev has proposed that would also increase presidential terms to seven years from the current five and reset the term count for Mirziyoyev.

The president was first elected in 2016 and then again in 2021. The referendum would permit him to serve 14 more years — Mirziyoyev would otherwise be termed out in 2026.