‘Shang-Chi’ Star Simu Liu is the latest “Jimmy Kimmel Live” guest host, and on Wednesday’s episode, he put his Marvel super hero skills to good use by teaching Kimmel’s sidekick Guillermo Rodriguez how to be a credible action hero.

Then they put those skills to use in a pretty funny fake action movie filled with cliches and, honestly kind of believable action too. You can watch it above right now.

Liu teed up the bit by bringing up his hit Marvel movie, “Shang-Chi and the Legend of the Ten Rings,” noting “to prepare for the role, I obviously did a ton of martial arts training. But when I agreed to host the show, I was very surprised to learn that Guillermo, our head of security, who let me just reiterate is tasked with protecting my life, has no martial arts training whatsoever,” he said.

“Uh, which I think is a bit of a problem. Guillermo, how did you even get this job?” Liu continued.

“I got drunk and I fell asleep in the parking lot,” Guillermo joked. 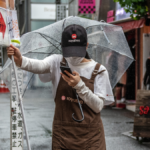 “So I called up my friend Chris Cowen, who is an action designer on ‘Shang-Chi,’ and we decided we’d try to whip Guillermo into fighting shape,” Liu continued. Cue the video.

The first half of the sketch is devoted to training Guillermo in action basics. First, how to fake a punch. Second, how to fake-take a punch. Third, how to credibly pull off stunt falls. And finally, how to combine them all in a scene.

Then they actually filmed a parody of an action movie scene, where Liu plays a crime lord and Guillermo plays his underling. Apparently, Liu has betrayed Guillermo several times, by stealing from him, sleeping with his wife, even adopting his kid. But Liu also accused Guillermo of being short with his week’s money, and the two fight it out until remembering they’re best friends.

But we pretty much ruin jokes by describing them, so stop reading and watch the clip above now.