They left their chickens, goats and dogs with the neighbors and now, pensioners Ludmila* and Vasile have finally made it to the spot where the borders of Ukraine, Moldova and Romania meet.

The couple comes from a village near the Ukrainian city of Tatarbunary, about halfway between Odesa and the Romanian port city of Galati.

They managed to pack their most important possessions into a small red suitcase — it now weighs about 10 kilograms (22 pounds) — and they dragged it for about an hour and a half, walking from the Ukrainian border post to the town of Giurgiulesti, in Moldova. The town sits at the juncture of the three borders.

It’s only 2 degrees Celsius (35.6 Fahrenheit) outside and a strong wind is blowing. The elderly couple’s faces are red from the cold, they’re both freezing. They’re exhausted from the long walk.

Ludmila is sad and nervous. Even though they’ve been traveling all night, they still don’t want to take the bus.

“It would have been even more awful,” Ludmila told DW. “To see so many single mothers on the bus with their babies.”

“I couldn’t bear to hear those poor children crying anymore, knowing they don’t have a home to go back to,” her husband added.

Despite all this, the elderly couple don’t want to talk about Russia, politics or war. They still seem to be worried about blaming anybody for the dramatic situation they now find themselves in.

They had been looking forward to a quiet retirement, they admitted. “After decades of working hard, we wanted to enjoy a few more lovely years,” Vasile explained, noting that they had both worked their whole lives. “Instead, we have to escape a war.”

A Romanian border guard called Ludmila’s cousin from her own cellphone and asked her to come and pick the pair up in Giurgiulesti. Until the cousin arrives, the Ukrainian pensioners wait in a large room where Romanian volunteers are handing out tea and coffee.

But Ludmila and Vasile don’t want anything to eat or drink. They just want to get as far away as possible from the Ukrainian border. 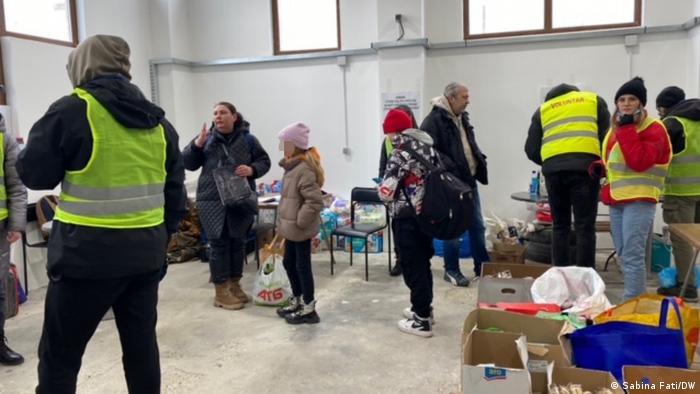 Volunteers are kept busy in the border town

Where will they go? After a long conversation, they eventually, hesitantly, reveal that they have two adult children who have been living in Austria for a long time. They hope to make it there.

Thousands of Ukrainian refugees are making the same journey daily, crossing the border at Giurgiulesti, although most do so in their own vehicles.

According to local authorities, about 75% of them travel onward toward Romania’s western border. By Saturday, Romania’s Interior Ministry had reported that almost 2,400 Ukrainian refugees had already applied for asylum.

In this border area, you also see a lot of expensive cars. Most likely belong to the more prosperous Ukrainians who live around Odesa. A white Audi Q7, one of the German carmaker’s luxury SUVs, roars off at speed after the border patrol check the driver’s and passenger’s papers.

This annoys Mariana*, a volunteer who’s helping with Ukrainian newcomers. “So many refugees are freezing here and have no transport, and there they are, just the two of them, in such a big car,” she complained. Mariana has been standing in the cold for three hours now, handing out free phone cards.

She’s actually Ukrainian, although she’s been living in Romania for the past 15 years. Since the war started over a week ago, she has been volunteering and acting as a translator. Fortunately, she said, her parents were visiting her in Romania when the war started and had arrived the day before the Russian invasion began.

Everything is well organized on the Romanian side and things move quickly. Unfortunately for anybody travelling through this triangular border area, they’ll also need to go through the Moldovan border crossing, and this is where some of the longest queues are.

Still, in both countries there has been great support and solidarity for the Ukrainian arrivals. There are countless volunteers everywhere, and free transport and emergency accommodation are also available. Many buses with Moldovan license plates are taking refugees to the larger Romanian city of Galati, about 30 minutes away. 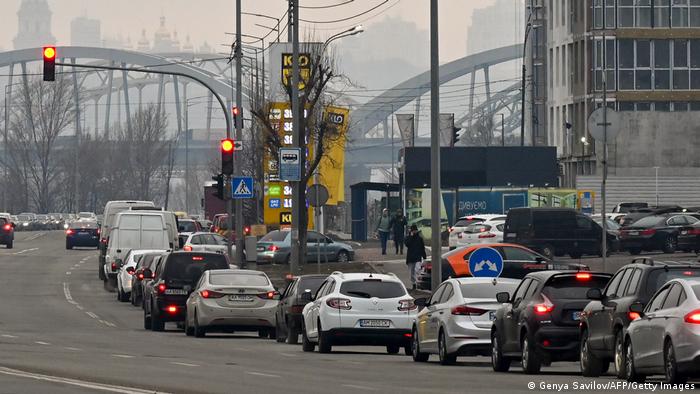 A 46-year-old librarian, from the Ukrainian town of Kiliya arrives in Giurgiulesti, together with a female friend. Both of them have two children in tow, and prefer not to share their names.

This is actually the second time she has had to flee, the librarian told DW. She had to leave Crimea in 2014 when Russia illegally annexed the area. The librarian said she never wants to hear about Russia again, and said she’ll never return either.

She locked the door of her apartment in Kiliya — she had only recently bought it — turned around and didn’t look back, she said. As a divorced mother, she has been looking after her children alone for some time now, and she said that she will take any job that is offered to her.

Beginning again in a strange country won’t be easy, she conceded, especially because she’ll have to learn another language. But she wants to do everything she can in order to give her children a better future and a good education.

“So that they never have to go back to the Soviet Union,” she explained, adding that she had never been happy there, not even as a young child.

The librarian told DW she was already feeling better here in Giurgiulesti, because there were no longer any air raid sirens. She didn’t yet know what the future held for herself or her children, but she did have one wish for the man who had caused them to lose their home, not once but twice.

“I would like to see Putin in prison,” she said.

*Editor’s note: DW has not published surnames due to safety concerns