‘SNL’: Watch How Show Bid Farewell to Pete Davidson and...

Kyle Mooney is also reportedly exiting the show, but while he had some great sketches, none of them really functioned as a goodbye. But don’t think we don’t already miss you, Kyle!

McKinnon got her sendoff in the show’s cold open when she brought back Miss Rafferty, her weird, TMI alien abductee. Read more about how they said goodbye to her here.

Bryant, meanwhile, got her tearful farewell when she showed up during Weekend Update with Bowen Yang to do one last installment of their “Trend Forecasters” characters. During the sketch, Bowen Yang — yes, with tears in his eyes — called Bryant a dear friend without whom he wouldn’t have been able to do “this” with, presumably meaning the sketch, but we saw those tears Bowen.

Shortly after, Davidson also showed up during weekend update for one of his personal monologues, which basically was a comedic version of his farewell Instagram post from earlier in the day. So of course, he repeatedly thanked “SNL” boss Lorne Michaels for his support over the years. 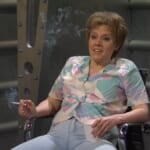 “He’s led us through the COVID era, even though the only time he wears a mask is at his eyes wide shut parties,” Davidson joked at one point. Watch here:

Left up in the air however is the status of several other “SNL” vets, including Cecily Strong and Kenan Thompson (19 seasons), along with co-head writer Michael Che. Guess we’ll have to wait a bit to see just how many job openings “SNL” will have for next fall.

“SNL” overlord Lorne Michaels recently hinted at a mass exodus when he said that the next season of the long-running NBC sketch show would be “a year of change.” That seemed at the time like a reference to “Weekend Update” co-anchor Michael Che, who recently told the New York Times that he’d been thinking of leaving “SNL” for the “past five seasons.” However he wasn’t among the longtimers given a flashy sendoff and may very well be back next season.

With the exits of so many longtime “SNL” powerhouse players, it’s safe to say next season is going to be weird. But like we alluded to above, this summer is going to be really fun and really stressful for a whole lot of comedians.