A group of seven self-employed miners in South Africa have been charged with raping eight women at abandoned mine in late July. Seven more men are due to be charged later on Thursday, prosecutors said.

The women, aged between 19 and 35, were models who had been filming a music video in an abandoned mine in Krugersdorp, near Johannesburg. The miners also allegedly stole the women’s purses, jewelry and cellphones.

The mine is nominally disused but residents have accused the miners of operating illegally there and of committing other crimes in their neighborhoods.

The alleged gang rape sparked protests and violent attacks against the freelance miners — who are known as zama zamas — not only in Krugerdorp but also in the surrounding towns of Kagiso, Bekkersdal and Mohlakeng.

Following the alleged sexual assault, local residents attacked some of the miners before handing them over to police. Police reportedly shot dead two of the suspects as they fled.

Angry citizens also stormed the miners’ camps and torched several of their shacks. 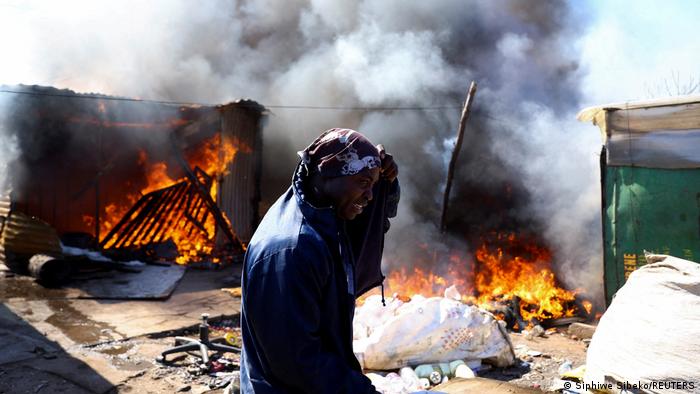 An angry mob torched a nearby miners’ settlement after the incident

The 14 men in question were identified by local residents from more than 80 suspects.

“We cannot rule out the possibility of more people being charged and added to the docket as investigations are ongoing,” National Prosecuting Authority spokeswoman Phindi Mjonondwane said outside the court. “We will be directed by the direction that the investigation is taking.”

Police Minister Bheki Cele said that at least 32 cases of rape were being investigated so far.

Sexual assault is a serious issue in South Africa, which is home to around 60 million people.

According to police statistics, 10,818 people reported rapes in the first three months of this year alone. However, police say the actually statistics are higher since most instances of rape and sexual assault go unreported.