All of Sri Lanka’s opposition parties were set to meet on Sunday in hopes of putting together a coalition government to take over after fierce protests forced President Gotabaya Rajapaksa and Prime Minister Ranil Wickremesinghe to agree to step down the day before.

The main opposition party, Samagi Jana Balawegaya (SJB), will meet with other opposition parties with the aim of coming to a consensus on Sunday so that they can form a government and Rajapaksa can resign.

Opposition lawmaker M. A. Sumanthiran from the Tamil National Alliance said that a coalition of all opposition parties could easily reach the 113 members needed to form a parliamentary majority.

Prime Minister Wickremesinghe said on Saturday he would step down to make the way for a coalition government to take power. President Rajapaksa also agreed to resign a few hours later, following months of protests calling for his removal that came to a head on Saturday as protesters stormed his residence.

Protesters spend the night in luxury

The storming of Rajapaksa’s home in the capital Colombo led to soldiers firing into the air so that the president could flee with the help of the navy. It was not clear where he was then taken and government spokesperson Mohan Samaranayake said on Sunday he had no information about Rajapaksa’s whereabouts.

Protesters stayed the night in the presidential palace, saying on Sunday that they would not leave until Rajapaksa finally steps down.

Student activists, who have played a big role in the protests against the government, said that they found 17.8 million rupees (roughly $49,000 or €48,000) in Rajapaksa’s room, which they handed over to the police, AFP reported.

Ordinary Sri Lankans took the opportunity to inspect the colonial-era palace, lounge on its sofas, swim in the compound’s private pool and try on Rajapaka’s clothes. 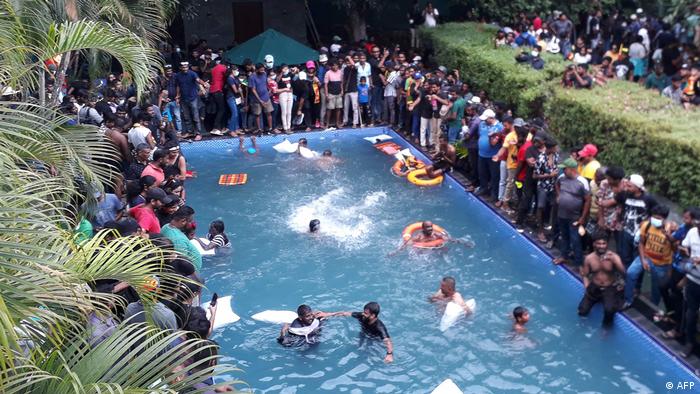 “They enjoyed super luxury while we suffered,” B. M. Chandrawathi, a 61-year-old handkerchief seller, told Reuters. “We were hoodwinked. I wanted my kids and grandkids to see the luxurious lifestyles they were enjoying.”

The protests and anger at the government came as the country slid into the worst economic crisis in its post-independence history.

Authorities had been in talks with the International Monetary Fund (IMF) over a possible $3 billion bailout since the country default on its foreign debt in April, as well as with the World Food Program (WFP) ahead of an expected food crisis.

Prime Minister Wickremesinghe had been conducting talks and the political upheaval has thrown their progress into doubt. The government has to submit a proposal to the IMF in August.

“We hope for a resolution of the current situation that will allow for resumption of our dialogue on an IMF-supported program,” the lending body said on Sunday.