Stephen Colbert Has COVID Booster Playdate With Anthony Fauci on...

On Wednesday’s “The Late Show,” Stephen Colbert had on as a guest Dr. Anthony Fauci. But instead of a traditional interview, the pair taped a fairly fun sketch to promote the latest COVID-19 vaccine booster. You can watch the whole clip at the top of the page now.

In the sketch, Colbert and Fauci left “The Late Show” studio and walked down to a pharmacy so that Fauci could get the latest booster shot. On the way, Colbert had some fun by asking Fauci to prove he’s a native New Yorker by repeating some famous catch phrases associated with the city.

Once they got to the pharmacy, Colbert and Fauci took a minute to pal around in the store. First Colbert joked that he’d be willing to buy condoms for Fauci if the doctor wanted some. Next, they took a detour through the Halloween section, where Colbert had a novel suggestion.

“OK, now I know you want to convince people to go get this shot, right? It’s the cool thing to do. OK, what could be more compelling than getting the shot with a pair of sexy kitten ears on?” Colbert said. Naturally, they both put them on and, after some cajoling, Fauci joined Colbert in saying “don’t forget to get your booster” directly at the camera. 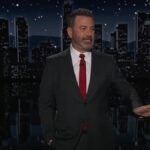 After that they tried on some novelty sunglasses before heading over to actually get the booster. The highlight of this part of the clip was when Colbert asked the pharmacist if he was intimidated giving the booster to Fauci. “It’s Anthony Fauci, that’s like pouring a drink for Jack Daniels,” Colbert joked.

“He’s actually only the third most famous person I’ve vaccinated,” the pharmacist said. This of course became Colbert’s obsession and he repeatedly tried to get the pharmacist to tell him who else he vaccinated.

“I can’t tell you that,” the pharmacist said. “Yes you can,” a faux-disappointed Colbert replied. Sadly for him (but happily for HIPAA compliance), the pharmacist didn’t budge.

After that, Colbert joked that Nicki Minaj’s cousin wanted him to ask if Fauci’s testicles were ok. “They’re fine,” Fauci said.