On Tuesday afternoon “The Daily Show” roasted the reaction from conservative circles to the FBI raid on Donald Trump’s Florida residence by contrasting it to how things went when Hillary Clinton was under investigation back in the day. And it was actually pretty funny.

To make the hypocrisy crystal clear, “The Daily Show” simply took footage of various Fox pundits talking about Hillary Clinton in 2016, but swapped out the footage of her with footage of the Trump raid from Monday instead. But don’t take our word for it, you can watch the whole thing above right now.

Of course you’re aware of the raid by now. Naturally, the response from across the spectrum of right wing thought has been predictably unhinged. It’s been so bad even The Washington Post notes how violent the rhetoric is getting in both “mainstream and extremist circles” on the political right. 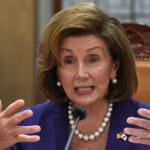 Fox News, in particular, has aired hours of content featuring various Republican operatives and even Fox News personalities advancing various conspiracy theories about the raid. You can read a sampling here or just watch this clip of Jesse Watters, who tosses off a string of conspiracy theories and later demanded that FBI chief Chris Wray, a Trump appointee, be fired.

Other Fox News types called the FBI itself into question and of course they all agree it’s an “abuse of power” by the Joe Biden administration.

But of course the entire network sang a very different tune 6, 7 years ago when Hillary Clinton was being (groundlessly) investigated by the FBI for how she managed confidential or classified communications. Back then, as far as Fox News was concerned, no one is above the law and the investigation served a very serious national need.

And that, of course, is what “The Daily Show” mocked.