A version of this story about Kareem Abdul-Jabbar and Barack Obama first appeared in the Down to the Wire: Drama issue of TheWrap’s awards magazine.

Kareem Abdul-Jabbar knows all about tough competition, but the basketball legend may be facing a fiercer foe than even Wilt Chamberlain or Julius Erving in this year’s Emmy race. And for that, he can thank the Outstanding Narrator category, which in its nine-year history has found an array of formidable voices going head-to-head: Sterling K. Brown over Anthony Hopkins, Meryl Streep over Laurence Fishburne and Ewan McGregor, Jeremy Irons over Daniel Craig and Whoopi Goldberg, David Attenborough over Chiwetel Ejiofor one year and over Morgan Freeman and Carl Reiner the next …

This year, Abdul-Jabbar is nominated for the second time for the History series “Black Patriots,” the first coming two years ago when he lost to Attenborough. His nomination this year comes during a very mixed year for the basketball team for which he used to play, the Los Angeles Lakers: In addition to a miserable season on the court, two shows about the team, the HBO series “Winning Time: The Rise of the Lakers Dynasty” and the Apple doc series “They Call Me Magic” were both largely ignored by Emmy voters. (A third, Antoine Fuqua’s “Legacy: The True Story of the L.A. Lakers,” will be eligible next year.) So Abdul-Jabbar’s nomination for narrating “Black Patriots: Heroes of the Civil War” might be the best Laker-related news to come out of the Emmys. 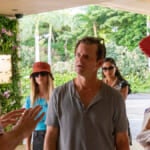 Still, Kareem may find that some of the other nominees in his category could put up a fight. For starters, there’s seven-time nominee and three-time winner David Attenborough for “The Mating Game” on Discovery+. There’s Oscar-winning actress Lupita Nyong’o for another nature program, “Serengeti II.” There’s W. Kamau Bell for the riveting Showtime doc series “We Need to Talk About Cosby.”

And there is, as the Lakers’ public address announcer might put it: “From Harvard Law School, Number 44, Barack Ooooo-bama!” The former president is nominated for narrating Netflix’s “Our Great National Parks” after being the subject of three previous Emmy-winning shows (and after his and his wife’s company, Higher Ground Productions, produced the Emmy-nominated “Becoming,” the Oscar-nominated “Crip Camp” and the Oscar- and Emmy-winning “American Factory.”

In his former job, Obama was the one giving an award to Abdul-Jabbar: On Nov. 22, 2016, the president gave the former athlete the Presidential Medal of Honor, saying, “The reason we honor Kareem is more than just a pair of goggles and the skyhook. He stood up for his Muslim faith when it wasn’t easy and wasn’t popular. He’s as comfortable sparring with Bruce Lee as he is advocating on Capitol Hill or writing with extraordinary eloquence on patriotism… (He is) an American who both illuminates our most basic freedoms and our highest aspirations.”

But will that be enough to win him an Emmy? Voters in the Creative Arts categories can be an unpredictable lot, but there are reasons to suspect this one could go to the first Black president over the NBA’s all-time leading scorer. Obama’s nomination makes him the second U.S. president to receive an Emmy nom, after the guy who was nominated in his pre-political life as the host and an executive producer of “The Apprentice” back in 2004 and 2005.

When Trump’s show lost to “Survivor,” he unsurprisingly claimed that the Emmys were rigged against him. (No, I’m not making this up.) So maybe it’s time to give Obama a prize that his successor so badly wanted and never got. Sorry, Kareem.

Read more from the Down to the Wire: Drama issue here.