The siginificance of the Zaporizhzhia nuclear power plant for Ukraine

Ukraine has four nuclear power plants with a total of 15 units. They produce 50 to 60% of the electricity in the Ukrainian grid, according to the state energy company Ukrenergo.

The plant in Zaporizhzhia is the largest not only in Ukraine, but also in the whole of Europe. It has six power units with a total capacity of 6,000 MW. And it generated almost half of the electricity produced by Ukraine’s nuclear power plants before the Russian attack, according to Petro Kotin, head of Ukraine’s state-owned nuclear power plant operator Energoatom.

Meanwhile, the plant has been under Russian occupation for almost six months, he said.

Connected to the Russian grid?

Russian troops have been using it as a depot for weapons and military equipment, according to Energoatom’s website. “The Russian military is shelling the nuclear power plant to destroy its infrastructure and disconnect it from Ukraine’s energy system.” The company stresses the threat to the safety of the plant and surrounding towns. All the while Moscow blames Ukraine for the shelling, claiming Russian troops are “protecting” the nuclear plant. 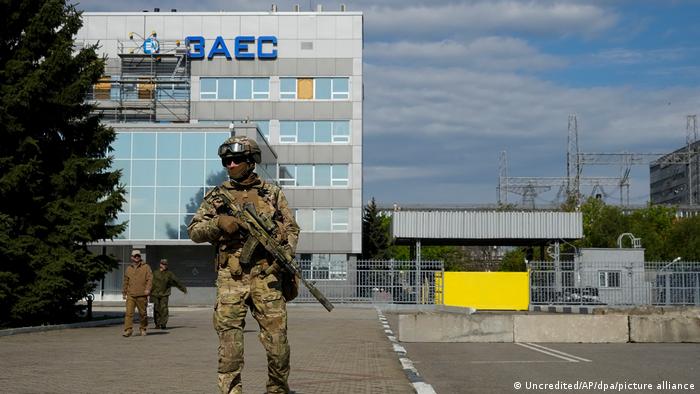 A Russian soldier guards the compound in Zaporizhzhia

As a result of fighting near the power plant, an overhead power line was broken twice, disconnecting two units from the grid on August 25 and triggering emergency protection, says the Ukrainian Nuclear Regulatory Commission. The plant’s workers quickly managed to restore connection to the Ukrainian grid and power generation for Ukraine.

“The nuclear power plant has not been running at full capacity since the occupation. Two, sometimes three units are in operation, with the third not running at full capacity. How much electricity the nuclear power plant generates for the Ukrainian grid is kept secret due to martial law,” Maria Zaturyan, who is responsible for communications and international cooperation at Ukrenergo, told DW.

She can’t imagine the Russian occupiers will succeed in disconnecting the Zaporizhzhia plant from the Ukrainian grid and integrating it into the Russian grid via Crimea — it is technically difficult, she said, and it would take both sides. Ukraine disconnected its power grid from the Russian grid on February 24, at the start of Russia’s war against Ukraine, and fully synchronized it with the continental European grid ENTSO-E in mid-March.

“To safely disconnect the Zaporizhzhia nuclear power plant from the Ukrainian grid and safely connect it to the power grid of occupied Crimea, it would take a technically complex desynchronization and subsequent synchronization, disconnecting one line at a time,” Zaturjan said, adding that the frequency in the grid of 50 Hertz would have to be maintained at all times to avoid problems or outages.

Although there are no data on the electricity currently produced at the plant, experts interviewed by DW consider its role in Ukraine’s energy system significant, especially because Ukraine currently exports electricity to the EU.

“Ukraine urgently needs the Zaporizhzhia nuclear power plant or it will not be able to fulfill its electricity export obligations. The electricity produced is intended exclusively for securing the heating season,” said Volodymyr Omelchenko, energy expert at the Kyiv Razumkov Research Center. The country needs the plant, says Olena Pavlenko, head of the DiXi Group analysis center, which monitors Ukraine’s energy market, adding that electricity exports “support the energy sector and compensate companies for decreased electricity prices for the population.”

Ukraine has been exporting electricity to Europe via Romania and Slovakia since June 2022, earning the company the equivalent of €67 million ($67 million) so far, according to Ukrenergo. The funds are needed to prepare for colder temperatures and the heating period — the purchase of coal, the repair of power plant units and power lines.

If revenues from electricity exports are lost, preparing for winter might be difficult. One scenario includes the nuclear power plant, and several more pessimistic scenarios don’t include any of the plants, said Maria Zaturyan. “That would be a difficult heating period, but possible to handle.” 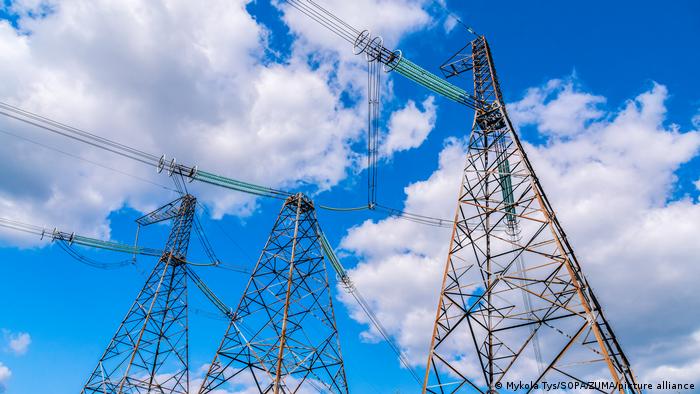 In 2017, Ukraine started preparations to synchronize with ENTSO-E, European association for the cooperation of transmission system operators (TSOs) for electricity

The DiXi Group’s Olena Pavlenko thinks Ukraine would definitely feel the lack electricity from the Zaporizhzhia nuclear power plant, but some factors could alleviate the situation. “Many people have left the country and large companies have shut down, so electricity consumption in Ukraine has dropped by 35%,” Pavlenko said. Unless everyone suddenly returns in the winter, the country can manage the season without the nuclear power plant, she added.

Observers stress that the Zaporizhzhia nuclear power plant is indispensable for the supply of power to the regions of Mykolaiv, Dnipropetrovsk, Zaporizhzhia, Kherson, and parts of the Donetsk and Kharkiv regions. If the Russian occupiers continue their dangerous attempts to connect the Zaporizhzhia nuclear power plant to the Russian power grid, these regions could lose power, an emergency operation would kick in connecting them with spare capacities from the Ukrainian power grid.

This article was originally written in Ukrainian.