“The Daily Show” star Trevor Noah became the latest TV host Monday night to weigh in on the quickly snowballing phenomenon that is the Trump Espionage Denier movement.

In trademark fashion, Noah boiled the denials down to four excuses, saying the reasons being drummed up for the former president’s absconding of a top-secret document trove should be vetted with a healthy dose of laughter.

“You know, what’s been the most fun?” Noah asked. “The most fun in all of this is how Trump and the red caps are working so hard to invent new excuses for why this crime wasn’t a crime. ‘Cause you remember when the story first broke, right? They were saying things like, ‘There’s nothing at Mar-a-Lago except a bunch of notes from Eric. And if they did find something, the FBI planted it. Well, forget all that. Forget all of it. It’s like two days ago, right? They got a fresh shipment of excuses today. Starting with, ‘It was homework.’” 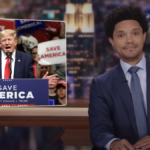 Noah then gives way to video of a news report on workers taking home work before returning for the punchline.

Noah then goes into another excuse — that Obama kept 33 million pages of documents, “much of them classified. How many of them pertain to nuclear – word is lots” — and how Trump emphasized Obama’s middle name in his social media post.

“I know what Trump is doing,” Noah said. “He’s trying to drum up all this Islamophobia, but everybody knows that that’s Barack’s middle name. It doesn’t sound nefarious anymore. You know? It just sounds like you’re, his mom, ‘Barack Husain, Obama! You get down here and clean up this mess right now!’ ‘Coming, Mom.’ 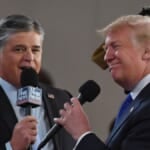 “But if you don’t like that excuse … Trump’s got another one for you,” Noah continued. “It’s about how he declassified these documents — in his mind.”

Trump has said he had a standing order that documents removed from the Oval Office and taken to Mar-a-Lago were deemed to be declassified the moment he removed them.

“Oh, that’s an interesting excuse — anything Trump took home with him was automatically declassified because he had a standing order,” Noah said. “It’s also super convenient that no one has ever heard about this rule. So he got busted for having top secret documents at his house, but whatever, I’ve actually heard this defense before. Yeah. Usually it’s when people get busted for having an affair, you know, they’ll be like, ‘No, actually I didn’t cheat on you. I’d already broken up with you in my mind on the way to their house. And then on the way home, I decided to give us another chance. Come here, baby. I forgive you. I forgive you. I forgive you.’” 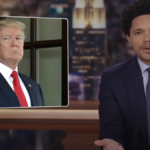 Noah saves the best for last, with an excuse that hits home for all of us.

“This is the greatest excuse of all time,” Noah said. “Trump’s people are saying, because he didn’t think he was leaving the White House, he packed in a hurry when he left. Yeah, he was so busy planning the coup he didn’t even think about packing. Is that what happened? It’s like, ‘Guys, I wasn’t trying to steal these documents. I was trying to steal the election. Why would I pack when I thought I’d have another 10 or 20 years in the White House?”

Watch the entire “Daily Show” segment at the top of this post.