Ukraine on Wednesday urged Western nations to impose more sanctions on Russia following a sweeping round on Tuesday from the EU, US and other Western nations targeting the economy and Putin’s inner circle.

Ukrainian Foreign Minister Dmytro Kuleba wrote in a tweet that more sanctions were necessary “to stop Putin from further aggression.”  Kuleba added, “Now it is necessary to increase the pressure. Strike the Russian economy and Putin’s entourage.”

Ukrainian President Volodymyr Zelenskyy also signed a decree calling up reservists between the ages of 18 and 60 on Wednesday, Ukraine’s armed forces said in a statement.

Western nations are using sanctions in response to a speech given by Putin on Monday that declared Russia had the right to seize Ukraine as part of the nation’s “spiritual continuum” while also violating international law by declaring the eastern Ukrainian regions of Donetsk and Luhansk “independent.”

With nearly 200,000 Russian troops amassed on Ukraine’s borders, Western countries are poised to throw down further sanctions should the US, UK and NATO warnings about an imminent invasion prove accurate.

Markus Ziener, a senior fellow at the German Marshall Fund in Berlin, told DW that Putin’s speech was “very disturbing.”

Ziener said, “It looked like he is in a bubble. He is in a mindset that is not really allowing much more room to maneuver.”

Blinken calls off meeting with Lavrov

US Secretary of State Antony Blinken said on Tuesday evening that he called off a meeting with Russian Foreign Minister Sergey Lavrov planned for Thursday, in another sign that an immediate diplomatic solution to the tensions in Ukraine is becoming less likely.

Speaking at a press conference alongside Ukrainian Foreign Minister Dmytro Kuleba, Blinken said he agreed to meet Lavrov on the condition that Russia not send troops into Ukrainian territory.

“Now that we see the invasion is beginning, and Russia has made clear its wholesale rejection of diplomacy, it does not make sense to go forward with that meeting at this time,” Blinken said.

However, Blinken said the US remains committed to diplomacy “if Moscow’s approach changes.”

He added that he would do anything to prevent “an even worse-case scenario, an all-out assault on all of Ukraine, including its capital.”

“But we will not allow Russia to claim the pretense of diplomacy at the same time it accelerates its march down the path of conflict and war,” Blinken said.

Blinken condemned Putin’s speech on the recognition of eastern Ukraine’s two separatist regions, calling it “deeply disturbing” and contending that Putin was “undoing more than 30 years’ worth of painstaking diplomacy.”

The White House on Tuesday said plans for a meeting between US President Joe Biden and Putin are currently off the table but added,

“We’re never going to completely close the door to diplomacy.”

UN Secretary-General Antonio Guterres condemned the deployment of Russian troops to eastern Ukraine, and rejected Russia’s characterization of the troops as “peacekeepers.”

“When troops of one country enter the territory of another country without its consent, they are not impartial peacekeepers, they are not peacekeepers at all,” Guterres said on Tuesday while calling Russia’s characterization a “perversion of the concept of peacekeeping.”

The UN chief added that the world is facing “the biggest global peace and security crisis in recent years” and called for de-escalation.

US imaging technology firm Maxar reported that satellite imagery over the past 24 hours showed more than 100 military vehicles and dozens of troop tents located in a small airfield outside the town of Mazy in southern Belarus near the border with Ukraine. 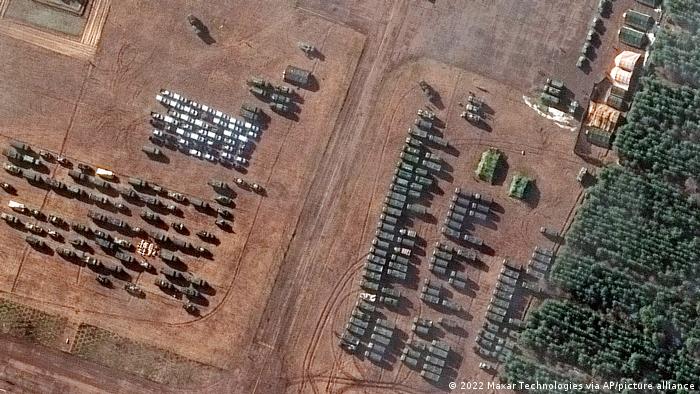 The firm also said heavy equipment transporters, used for moving tanks and artillery, were spotted in the city of Belgorod in western Russia near the Ukraine border. 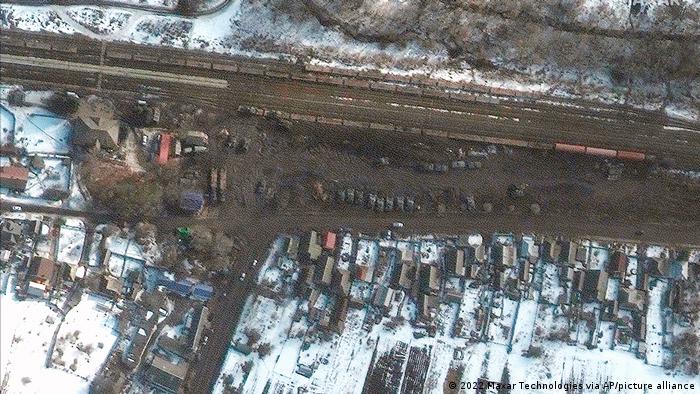 Satellite images show armor and vehicles at a railyard in Belgorod, Russia

According to Maxar, the images also showed a new field hospital had been added to a military garrison in western Russia.

Japan’s measures include a ban on issuing visas to individuals linked to the two regions, as well as freezing their assets and barring trade. The sanctions also ban the issuing and trade of Russian government bonds in Japan.

Australian Prime Minister Scott Morrison announced that Australia would impose sanctions on eight of Putin’s top security advisors, including travel bans. Morrison said that this was “only the start of this process” and that subsequent rounds of sanctions are expected.

Canadian Prime Minister Justin Trudeau announced on Tuesday a first round of sanctions on Russia. Trudeau said that his government will ban Canadians from financial dealings with Ukraine’s separatist regions and ban Canadians from purchasing Russian sovereign debt.

Recent developments in the Ukraine crisis

German Chancellor Olaf Scholz said Tuesday that Germany has taken steps to suspend the process of certifying the Nord Stream 2 gas pipeline from Russia in response to the developments in Ukraine.

The move was made in consultation with the US, as part of a previous agreement the pipeline would not be activated if Russia “invaded” Ukraine.

Meanwhile, US President Joe Biden announced a “first tranche” of sanctions against Russia.

Also on Tuesday, Russian parliamentarians gave Putin permission to use military force outside the country, after Putin had sent a letter formally asking for approval for the use of military force.

The move formalizes a Russian military deployment to separatist regions in eastern Ukraine, Donetsk and Luhansk, a day after Putin recognized the independence of the two self-proclaimed “people’s republics.”