This article was last updated at 09:33 UTC/GMT

Russia says it has withdrawn from Snake Island

The Russian military says its has withdrawn its troops from Snake Island, an island belonging to Ukraine located in the Black Sea.

Russia’s Defense Ministry said it pulled out its forces from the island near the Black Sea port of Odesa as a “goodwill gesture.”

The ministry said the withdrawal demonstrated that “the Russian Federation wasn’t hampering the United Nations’ efforts to establish a humanitarian corridor for taking agricultural products from the territory of Ukraine.”

The arms package is valued at around 500 million Swedish crowns ($49 million, €47 million), the ministry said.

It is the first grain shipment since the conflict began on February 24.

“After numerous months of delay, the first merchant ship has left the Berdyansk commercial port, 7,000 tonnes of grain are heading toward friendly countries,” Evgeny Balitsky, the head of the pro-Russia administration, said on Telegram.

Russia’s Black Sea ships “are ensuring the security” of the vessel during its journey, he said, adding that the Ukrainian port had been de-mined.

Russia is trying to blockade Lysychansk, the last part of the eastern Luhansk region that is still under Kyiv’s control, the Ukrainian military said Thursday.

The Ukrainian General Staff said attacks were centered around the oil refinery in the city.

British intelligence has also picked up on the fighting in Lysychansk, saying that “current ground combat is likely focused around the oil refinery, located 10 kilometers (6.2 miles) south-west of the city.”

“Fighting is going on all the time. The Russians are constantly on the offensive. There is no let-up,” regional Governor Serhiy Haidai told Ukrainian television. “Absolutely everything is being shelled.”

Haidi added that Moscow “have thrown practically all their forces to seize the city.”

Rights group Amnesty International released a report on Thursday into the devastating airstrike on a theater in the besieged Ukrainian port city of Mariupol.

The report gathered evidence that suggests Russia deliberately targeted the theater where civilians were sheltering on March 16 — in what amounts to a “war crime.”

“Until now, we were speaking about an alleged war crime. Now we can clearly say it was one, committed by the Russian armed forces,” Oksana Pokalchuk, head of Amnesty’s Ukraine branch, told news agency AFP.

The report used statements from 52 survivors and witnesses about the airstrike, and had experts examine photos, videos and satellite images of the scene.

They determined that the sky was clear enough for a pilot to see the word “children” written in large Cyrillic letters on the front and back of the building.

Weapons analysts determined that two 500 kilogram bombs dropped from a Russian jet were most likely behind the strike.

Amnesty said the evidence discredits Russia’s claims that the theater was hit by Ukrainian troops in a false-flag attack.

City officials estimated around 300 people were killed in the strike, but the report suggested that the toll was not as high, as some witnesses said the building had emptied due to evacuations in the days prior to the attack. 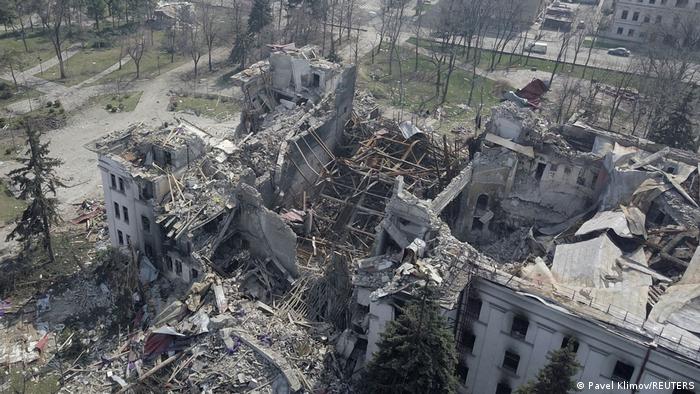 What happened in Russia’s war in Ukraine on Wednesday

NATO members branded Russia as the most “direct threat” to the transatlantic military alliance’s security over its invasion of Ukraine.

The announcement came amid a NATO summit in Madrid on Wednesday, where Finland and Sweden were officially offered membership.

In reaction, Russian President Vladimir Putin said Moscow would respond in kind if NATO deployed troops in the Scandinavian countries.

Meanwhile, fighting intensified in the eastern Luhansk region as well as in southern Ukraine. Several missiles struck the city of Mykolaiv, a river port located off the Black Sea.

Ukraine also carried out its biggest prisoner of war exchange, securing the release of 144 soldiers.

Click here to catch up on Wednesday’s developments on Russia’s war in Ukraine.