This article was last updated at 06:52 UTC

Anton Herashchenko, a Ukrainian Interior Ministry advisor, wrote on Telegram that Russian soldiers had been spotted on the city’s streets.

“The Russian enemy’s light vehicles have broken into Kharkiv, including the city center,” Sinegubov said. “We ask civilians not to go out.”

Russian forces also said on Sunday morning that they had placed the southern city of Kherson and southeastern city of Berdyansk under siege.

“Over the past 24 hours, the cities of Kherson and Berdyansk have been completely blocked by the Russian armed forces,” Russian Defense Ministry spokesman Igor Konashenkov said in a statement.

There was no immediate evidence of a radioactive leak, the Ukraine State Nuclear Regulatory Inspectorate said on Facebook.

“The hit was on the fence. The building and containers are intact,” the service told Interfax.

The service said that once it was safe, inspectors would properly assess the damage.

Russian forces pounded several cities overnight. In the town of Vasylkiv, on the outskirts of Kyiv, the bombardment set an oil depot ablaze.

“The enemy wants to destroy everything,” the town’s mayor, Natalia Balasinovich, said in a social media post.

Authorities have warned residents to close their windows because the burning depot is emitting smoke and toxic fumes.

The State Service of Special Communications said a natural gas pipeline was also blown up in Kharkiv, Ukraine’s second-largest city.

One person died, and 80 others had to be rescued. Most of the building’s residents had been sheltering in the basement.

In a phonecall, Macron told Lukashenko that fraternity between the people of Belarus and Ukraine should lead Belarus to “refuse to be a vassal and an accomplice to Russia in the war against Ukraine,” his office said in a statement.

Russia used Belarus as a springboard for part of its attack on Ukraine.

In an about-face, former US President Donald Trump has condemned Russia’s invasion of Ukraine.

Speaking at the CPAC conservative gathering in Florida, he called Ukrainian President Volodymyr Zelenskyy “a brave man” and praised him for “hanging in.”

“The Russian attack on Ukraine is appalling, it’s an outrage and an atrocity that should never have been allowed to occur,” Trump said, adding that it would never have happened had he been president.

The remarks are in sharp contrast to his words earlier in the week when he called Russian President Vladimir Putin “genius” and told donors at his Mar-a-Lago Club that Putin’s moves were “pretty smart.”

The Ukrainian ambassador to Berlin has welcomed Germany’s decision to supply weapons to Ukraine.

“We are glad that Germany has finally made this 180-degree turn,” Ambassador Andrij Melnyk told Germany’s DPA news agency, calling it a historic step.

The German government said Saturday it would provide Ukrainian forces with 1,000 anti-tank weapons and 500 “Stinger” surface-to-air missiles. Berlin had long held back on sending such weapons due to its long-standing policy of not exporting arms to conflict zones.

“I have always said to my German friends and to the German government that they will not be able to bear the terrible images of the war in Ukraine for long without reacting,” Melnyk said.

“The task now is to get the German weapons systems to the Ukrainian defenders as soon as possible.”

He also called for Germany to play a leading role in putting together “a comprehensive economic rescue plan” for Ukraine.

Moscow has restricted access to certain social media platforms to try and keep information of the situation in Ukraine from the Russian public, the latest British defense intelligence update suggests.

The update from the Ministry of Defense also said Russian forces were “not making the progress they had planned.”

According to internet monitoring group NetBlock, Twitter was heavily restricted and, in some instances, even blocked in Russia on Saturday.

Internet connectivity in the country has been affected by the Russian invasion.

Starlink beams signals for high-speed internet from space but isn’t yet available worldwide.

Musk wrote on Twitter that his company was sending internet terminals to Ukraine to use the service, though it was unclear how many.

Air raid sirens could be heard as night fell in Kyiv.

A curfew is in place in the city until Monday. Residents have been seeking shelter in subway stations.

Small numbers of Russian troops were reportedly inside Kyiv, but Britain and the US said the bulk of Russian forces were still 30 kilometers (19 miles) from the city’s center as of Saturday afternoon.

The Reuters news agency cited witnesses inside Kyiv as reporting occasional blasts and gunfire in the city.

Some Russian banks to be cut off from SWIFT

The EU, US, UK and Canada have pledged to cut off a number of Russian banks from the SWIFT interbank payments system. 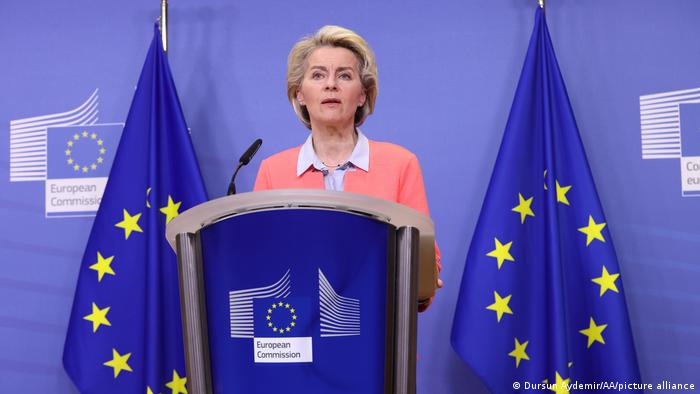 “All of these measures will significantly harm Putin’s ability to finance his war and they will have a severely eroding impact on his economy,” European Commission President Ursula von der Leyen said.

She said Western leaders would continue imposing costs on Russia for its invasion of Ukraine.

“Putin embarked on a path aiming to destroy Ukraine but what he is also doing in fact is destroying the future of his own,” she added.

Summary of events in Ukraine-Russia crisis on Saturday

EU foreign ministers said they planned to convene a virtual gathering on Sunday to discuss further assistance for Ukraine and punitive measures towards Russia.

In a move that marks a major change of course for Germany, the Bundeswehr will send 1,000 anti-tank weapons and 500 Stinger-class surface-to-air missiles to Ukraine amid the ongoing Russian invasion, the government announced.

Kyiv is under curfew until Monday. The mayor, Vitali Klitschko, ordered residents to stay indoors, warning that people outside would be considered “members of sabotage and reconnaissance groups.”

Filippo Grandi, the UN’s high commissioner for refugees, said on Twitter that the number of Ukrainians who have already fled to neighboring countries was now more than 150,000.

Demonstrators in cities across the globe have expressed solidarity with Ukraine, with many expressing anger at Russia’s decision to invade its neighbor.

The Russian owner of Chelsea FC, Roman Abramovich, said he is handing over the club to the trustees of its charitable foundation.