The fight over the eastern Ukrainian region of Donbas is entering its final stages. After taking over Sievierodonetsk and Lysychansk, Russian troops now control most of Luhansk region. Fierce fighting currently rages in the west and south, as Russia pushes to take Sloviansk, Kramatorsk and Bakhmut, three cities still remaining under Ukrainian control. All three hold strategic as well as symbolic significance.

Until a few years ago, the quiet town of Sloviansk was barely known outside the Donbas region. A city of just 100,000 people, it hardly ever made the news. All that changed in 2014, when local separatists took control of the city with the help of Russian intelligence agencies.

Why here, why Sloviansk? Observers think the answer is geography. Sloviansk is located far from any major cities, yet close enough to a strategically important highway M03, linking the capital Kyiv with Kharkiv and continuing to the Russian border near Rostov-on-Don. 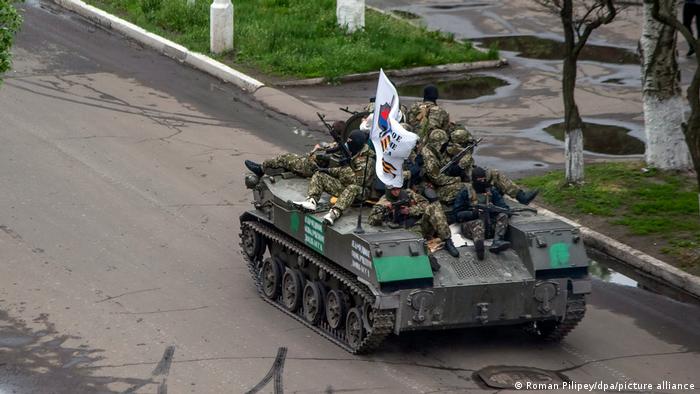 Armed men in Sloviansk in April 2014

Back then, a few dozen armed men stormed the police headquarters, took control of the local administration and captured the city. They were led by a former Russian secret service agent, Igor Girkin, nicknamed Strelkov.

In several interviews after the takeover, Girkin said he and the men had come from recently annexed Crimea. They, like the soldiers who seized Crimea, had worn balaclavas to conceal their identities. Their takeover was welcomed by Sloviansk’s mayor and Girkin pronounced himself defense minister of the “Donetsk People’s Republic.”

Ukraine’s army and intelligence agencies immediately tried to retake the city. The fighting that broke out in April can be regarded as the beginning of the Donbas war.

Ukraine’s efforts were in vain. It lost soldiers and heavy equipment, including helicopters. Both sides fought bitterly to control a television tower on Karachun mountain where pro-Russian separatists had activated Russian channels, and shut off Ukrainian broaadcasts. Ukraine was able to finally take back the city in July 2014. Girkin and around a thousand separatist fighters fled to Donetsk.

Kramatorsk was also seized by separatists in spring 2014 but was retaken by Ukraine after about three months. Fighting centered round the strategically important military airport, which Ukraine was able to hold throughout. 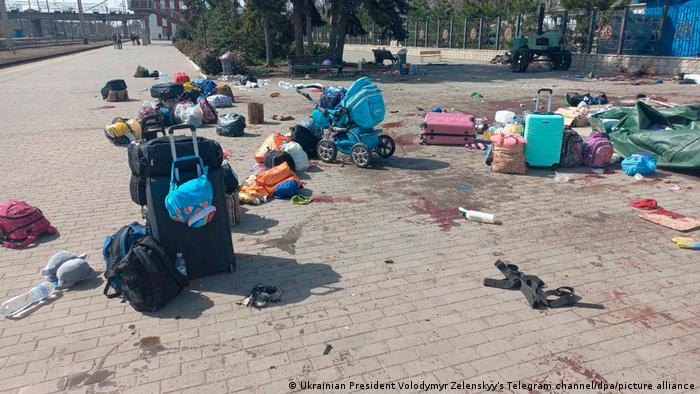 In autumn 2015, Kramatorsk was made the administrative center of Donetsk. Government departments were moved from the separatist-controlled city of Donetsk to Kramatorsk. Ukraine’s Donbas forces are headquartered here.

Kramatorsk is regarded as one of eastern Ukraine’s most important industrial centers. The Novokramatorsk Machine Building Plant, or NKMZ, is one of the largest plants in the region and mainly produces mining equipment. Until 2014, Russia was its biggest client. When Russian forces invaded in February 2022, production ceased.

Several weeks later, in April, Kramatorsk made headlines when a Russian rocket struck its main train station. Over 50 people died, most of them refugees, including children, who were hoping to flee.

Bakhmut, the third key city in the region, is situated by a highway leading to Lysychansk. This highway is deemed an essential route for keeping Ukrainean troops supplied. Heavy battles were fought here in 2014 and 2015.

During Soviet times and up until 2016, Bakhmut was known as Artemovsk. Its old name, Bakhmut, was reinstated as part of a regional effort to move beyond the Soviet Communist era. It, too, was briefly seized by pro-Russian seperatists in 2014 but Ukraine quickly regained control. The highway connecting Bakhmut with Lysychansk

Bakhmut, which has a population of about 70,000, is the smallest of the three cities under threat. Even so, it has a key role in the Ukrainian economy. Two companies are of particular significance: Artwinery is one of the largest producers of sparkling wines in Eastern Europe and Artemsii is a well-known table salt producer. Its output accounts for some 90% of Ukraine’s salt consumption. Distributing the condiment through the country has become impossible since Russia invaded in February. The cost of salt has subsequently spiked in Ukraine. It is forced to import salt from abroad, including from Germany.