Despite fears that authorities may crack down on athletes who express political positions during the 2022 Winter Olympics in Beijing, Ukrainian skeleton athlete Vladyslav Heraskevych displayed a protest sign that said “No War in Ukraine” after competing in an event Friday night.

“In Ukraine, it’s really nervous now. A lot of news about guns, about weapons, what’s to come in Ukraine, about some armies around Ukraine. It’s not OK. Not in the 21st century. So I decided, before the Olympics, that I would show my position to the world,” Heraskevych also said.

Soon after, the International Olympic Committee said Heraskevych would face no penalties for the protest. 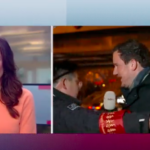 The comments come amid a declining diplomatic situation in the region, as increased Russian aggression against Ukraine culminated Friday with more than 100,000 Russian troops positioned at the border with Ukraine. Several countries have pulled their diplomatic personnel and urged citizens to leave the country, and on Friday, US national security adviser Jake Sullivan warned that Russia may, in fact be on the verge of an invasion. Though President Joe Biden and Russian leader Vladimir Putin are expected to speak on Saturday.

Displays of political opinions or protests are generally forbidden during the Olympic games, though the IOC relaxed those rules somewhat for the Tokyo games last year. Even so, China’s authoritarian government has been somewhat unsubtle in how it is treating foreign visitors during the Olympics, going so far as to briefly detain a Dutch reporter who was in the middle of a live broadcast last week.

And while the U.S., Britain, Australia and Canada are conducting a so-called diplomatic boycott of the games, citing “genocide and crimes against humanity,” they have not withdrawn athletes from the games. As such, officials, including Speaker of the House Nancy Pelosi, have urged athletes not to engage in protests during the games to avoid angering Chinese authorities.

For those unfamiliar, Skeleton is a sledding sport using what’s known as a “Skeleton bobsled.”