Watch How the U.S. Open Paid Tribute to Serena Williams...

Earlier this month, Serena Williams announced in her cover story essay appearing in the September issue of Vogue that she might, maybe, be retiring soon. She didn’t give a deadline for her retirement but implied strongly it’ll likely be soon.

Speculation, in fact, is that the current U.S. Open will be Williams’ final tournament as a professional tennis player. Well, on Monday Williams played her round one match in the U.S. Open, against Danka Kovinic. Had she lost to the 27 year old, it could have been Williams’ last game.

Williams won the match, but the U.S. Open organizers were prepared anyway just in case. So it was that after the match ended, Williams received a special ceremony in which first Gayle King, then fellow tennis legend Billie Jean King paid tribute to her. 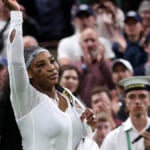 “Before you go, we have one more surprise for you,” Billie Jean King said, which turned out to be the signal for a massive tribute from the fans at Arthur Ashe stadium. Turns out everyone had been given colored cards that, when held up, spelled “We Love Serena.”

Watch that go down here:

“I have never liked the word ‘retirement.’ It doesn’t feel like a modern word to me,” Williams wrote in her Vogue essay. “I’ve been thinking of this as a transition, but I want to be sensitive about how I use that word, which means something very specific and important to a community of people. Maybe the best word to describe what I’m up to is ‘evolution.’ I’m here to tell you that I’m evolving away from tennis, toward other things that are important to me.”